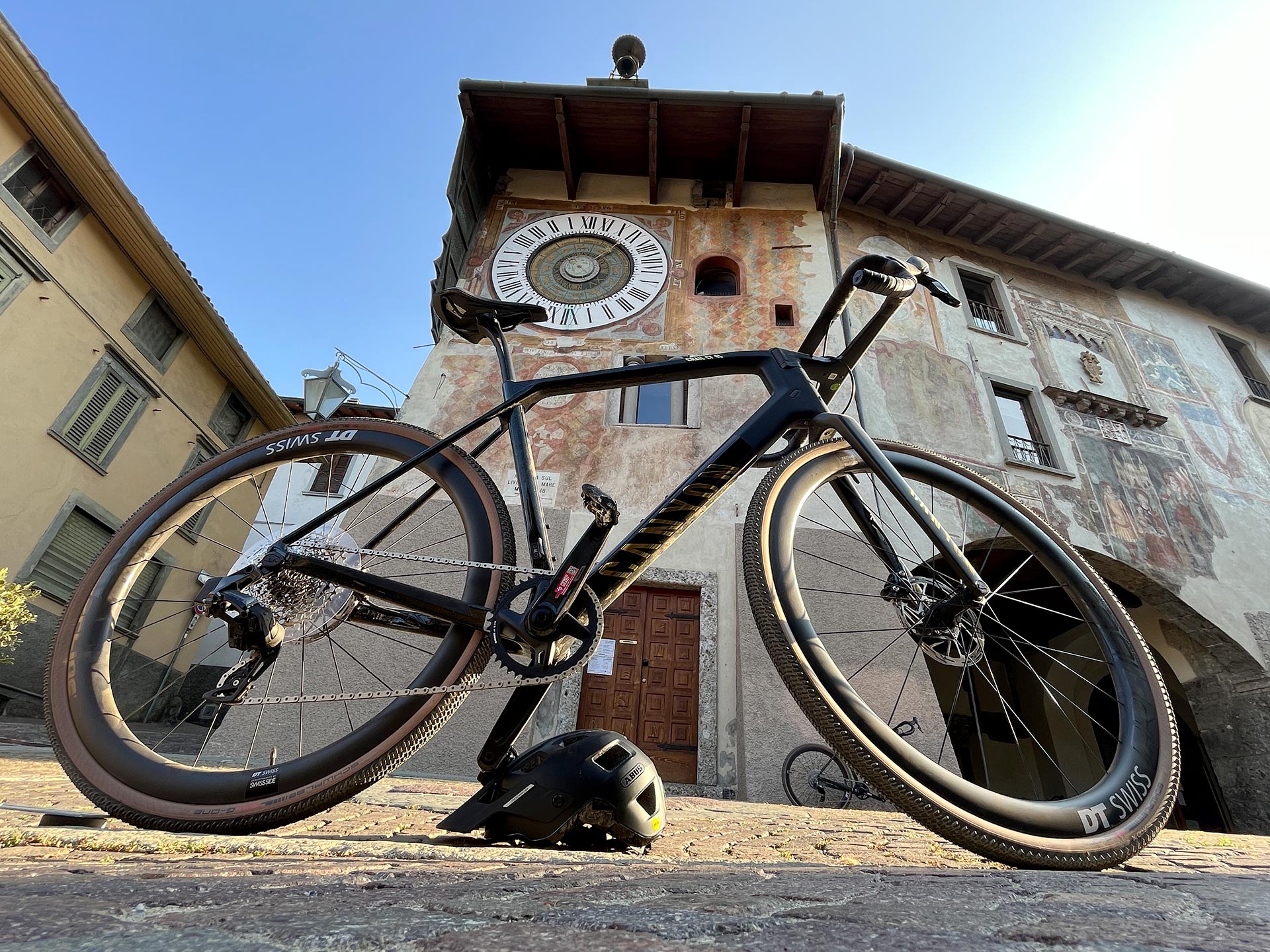 Hidden in Val Seriana, Val di Scalve and Val Borlezza you will find isolated corners of beauty and serenity that are still intact and able to give, to those who reach them, moments of ecstasy and inner wonder. Especially if you reach them investing a little effort!

Fatigue strips us of the superfluous and makes our souls more receptive and ready to embrace the beauty of chestnut woods, pastures, isolated chapels, unique sanctuaries in Italy, high-altitude museums, nature parks, panoramas of the lively valley or quietly shimmering lakes.

We propose three routes that are ideal for gravel bikes to discover accessible yet often underestimated beauty.

Gravel route of the lakes

Gravel route of the lakes

From Clusone’s astronomical clock, you will pedal at the foot of Monte Polenta, breathing in the fragrance of fields of red beaked maize until you reach Rovetta. You then cross the 128-metre-long Ponte Vecchio, the first light-weight concrete bridge built in Europe, reminiscent of California’s iconic Bixby Creek Bridge.

A steep shortcut at Cerete Alto leads to the old mill in Cerete Basso.

The right bank of the Borlezza stream hides a very pleasant gravel segment up to the fork to the Sanctuary of the Madonna della Torre, commissioned by Charlemagne in 801 to protect his expulsion of the Lombards. 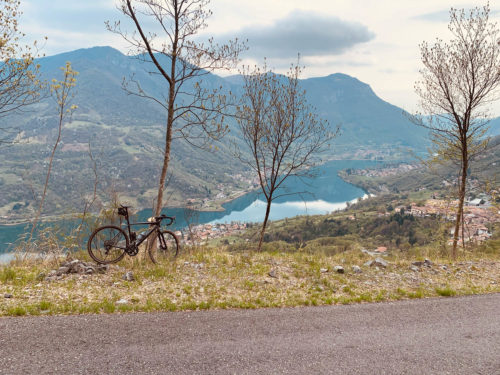 Lake Gaiano is a hidden gem, the smallest low-altitude lake in Lombardy, and can be discovered by lowering yourself on your handlebars amongst the branches.

Lake Iseo is undoubtedly better known. For geologists, the Bergamo shore is an open-air encyclopaedia, with outcroppings symbolic of the Alpine foothills, such as the argillites of Riva di Solto. The asphalt road between Riva di Solto and Lovere mimics the lakeshore giving the illusion of pedalling directly on the water. Steep cliffs to the left and lake waters to the right, often separated only by a narrow concrete wall.

From Lovere, registered in the club of ‘Italy’s most beautiful villages’, you will ascend on steep, direct roads. Now you can catch your breath, looking back and admiring the lake as you gain altitude.

Why all this effort? For the breathtaking and prolonged views along the panoramic road between Ceratello and Bossico, located at an altitude of 900 metres.

The main asphalt road takes you back to Valle Borlezzo where you get back on the secondary route used this morning.

From Onore, the Val di Res on the right bank of the Gera stream takes you to the town of Castione della Presolana, far away from traffic amongst mountain pastures and huts that seem to have been forgotten by time. The alternative ascent to the Presolana Pass (1297 m), passing through the lively centre of Dorga, caresses the massive and imposing faces of the “Queen of the Orobie mountains”.

The ‘sponda’, a steep road famous for its Giro d’Italia (Cycling Tour of Italy) stages and murals, including the famous handing of the water bottle between Bartali and Coppi, takes us into Val di Scalve. From the Dezzo, climb up to Azzone where you will enter the ‘Boschi del Giovetto di Paline’ Regional Nature Reserve. 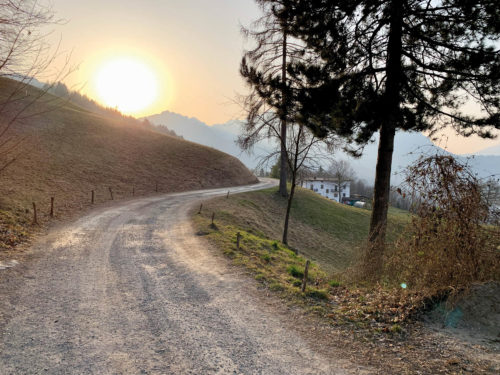 The dense forests of ‘pagher’, European spruce, are the realm of rufa wood ants, to which an impressive sculpture by Mattia Trotta has also been dedicated. In the shade of this picturesque park, you will also find the old Furfì sawmill, and a geomorphological trail that reveals the actions of glaciers still visible on the slopes outlining Bergamo’s valleys. A steep and enjoyable descent closes the park ring.

You now face the challenge of the Sponda uphill, echoing the feats of cyclists of the past, or those who became great on these roads, such as local champion Paolo Savoldelli.

Just before returning downhill to the Presolana Pass, make a detour to the Salto degli Sposi (Spouses’ Leap). The overwhelming and sweeping view is dominated by Pizzo Camino. Here you can discover the legend of a Polish artistic couple, he a musician and she a painter, who in the 19th century made their love eternal in a leap into the void below.

The pleasantly unpaved and slightly downhill road leads to the meadows of Castello Orsetto, at the foot of the Monte Pora ski slopes. From here, the road leads back to Dorga and descends once again towards Clusone.

The Valle Seriana cycle path follows the route of the old railway line, teasing the busy and industrious provincial road, taking shelter first in the pine forest of Clusone, then amongst farms and from Ponte Nossa along the banks of the Serio River. It consists of an almost entirely asphalted cycle path, aside from a pleasant stretch of dirt road.

From Cene, you ascend through Valle Rossa, first on asphalt and then deviating onto dirt and concrete in the forest, along a road frequented by woodcutters. 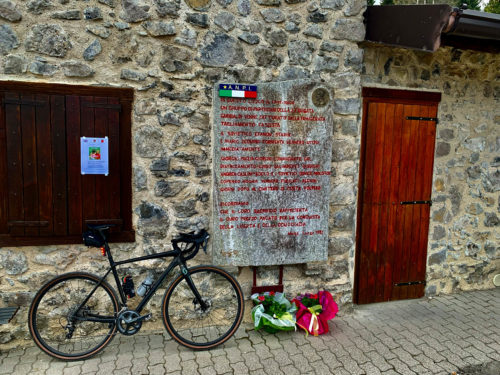 From the Pass, a broad descent on a road leads to the village of Ranzanico, from where the ascent to the Ranzanico Forcella (saddle) begins. The silent panorama over Val Cavallina and Lake Endine accompanies the ascent on rough asphalt.

From the Forcella begins a long traverse consisting of ups and downs and also gentle, cyclable stretches that circle Monte Sparavera. The old Via della Lana (wool route), expanded in the 16th century to expedite the transit of Val Gandino’s highly valued wool, is a skate park for gravel bicycles, with views of Lake Iseo and Endine, broad pastures, stone huts, horses, cows and vertical bird snare structures.

Malga Lunga, a partisan stronghold and today a shelter-museum, takes us back to the asphalt. A wonderful descent through the Valle Piana leads back to Casnigo.

From Colzate, you can take the cycle path back to Clusone, or ride up to Italy’s lone sanctuary dedicated to San Patrizio (Saint Patrick), the patron saint of Ireland. Its frescoes and position clinging to dark sheer rocks are worth the effort. The route continues to the locality of Barbata, an oasis of hushed nature at the foot of severe Monte Alben. Here, a mule track, and a short stretch of single-track trail to be travelled on foot amongst the characteristic hunting tabiotti (huts) leads to Val del Riso, where you take the Val Seriana cycle path again towards Clusone.

Go cycling in discovery of the hidden beauties of our valleys, using the 3 brand-new circuits, and you will be entitled to enter the Gravity Gravel Hall of Fame that best represents you and win prizes and technical gadgets! 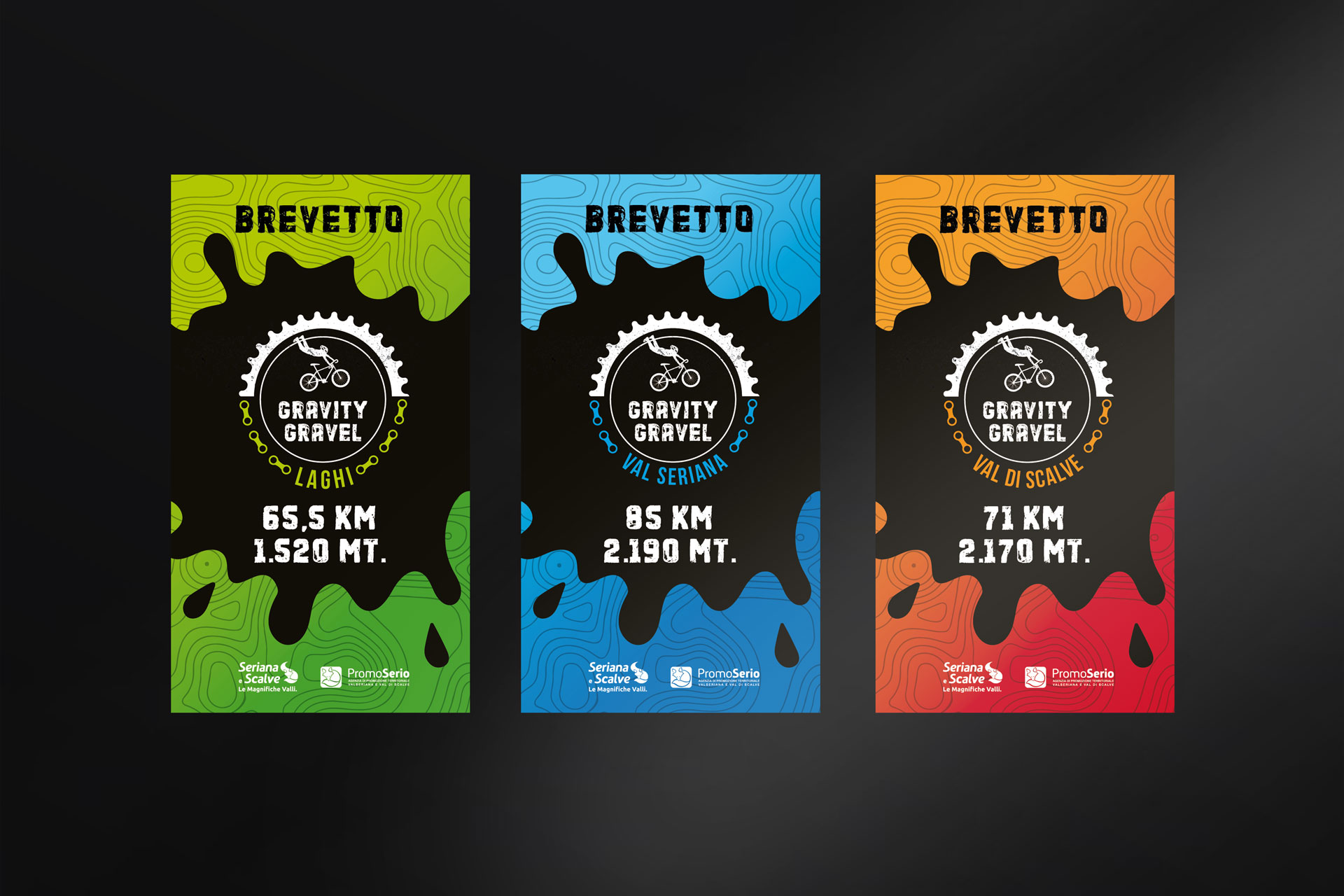 How does it work?

Gravity Gravel is a licence created for those who enjoy biking uphill, defying gravity, which can also be our friend, giving us thrills and the knowledge that we have deserved these isolated spots with breathtaking views.

– Now start pedalling! (For the more social and generous of you, share your most beautiful photos with the hashtag #gravelvalseriana and #valdiscalve by tagging @valseriana_e_scalve .

Email to this address turismo@valseriana.eu the link to Strava /Komoot/Relive or any registration platform where the completion of the circuit can be checked.

You are entitled to enter the Hall of Fame ranking, which will be updated from year to year. Will you be a Gravity Gravel King/Queen

Pick up your Gravity Gravel brand technical gadgets at the Promoserio office in Ponte Nossa!

Participate in the contest that will give an award for the most creative photo/post on the route at the end of the year.

Participate in the final drawing with those who have completed all three circuits within the calendar year and win technical prizes.

The terrain is mixed, including asphalt, gravel and some single-track trails. The roads are almost all secondary roads, mule tracks, cycle paths or trails.
The slopes can be steep in certain points, but the effort will certainly be rewarded.

Along the route, however, there will be many resting points, in the various towns in Val Seriana, on Lake Iseo and Val di Scalve.
The routes are also perfect for those who want to do more than just cycle: not only bicycles, but lots of nature, too, with woods that provide the relief of shade, nature trails with flora and fauna signage, cultural points of interest such as sanctuaries and historical museums, but also regarding sports with the roads used for the Giro d’Italia, and legends, such as the tragic-romantic Salto degli Sposi (Spouses’ Leap).

The ideal bicycle is the Gravel bike, which allows you to take on any terrain, in agility uphill and using speed on flat land. However, there is nothing to prevent you from tackling the licence with a mountain bike, travel bike or E-bike.
Tyres recommended at least 35 mm and 1:1 or more agile gears.

The 3 circuits we have proposed all have different characteristics in terms of landscape, nature and also cycling. That is why we invite you, no, we challenge you to tackle all of them. The order in which you decide to take them on does not matter. We have presented them on a scale of increasing difficulty:

If you complete all of them within the calendar year, you will be awarded the GRAVITY GRAVEL licence and entitled to have your name in the Hall of Fame, which is updated every year.